WHAT I WAS DOING WHEN I WAS SIX

“My heart leaps up when I behold

A rainbow in the sky:

So was it when my life began;

So be it when I shall grow old,

Or let me die!

The Child is father of the Man;

I could wish my days to be

Bound each to each by natural piety.” 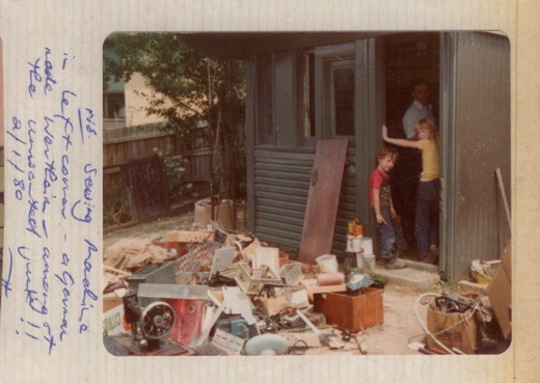 Dean, his Sister and their Dad reorganizing the shed – the source for every idea. Why invent when you can innovate? – Jan 1980

In a general sense, my natural behaviour and the profound relationships I’ve developed have created some outcomes that relate to more specific, key findings on the matter.

But to start with, I have investigated the overall patterns in my life, what is referred to as “life-stage theory” and how it relates to the progress of my career in the design industry. I’ve also paid attention to my cognitive development, and taken a the closer look at the “childhood-adulthood connection”, concentrating on the soulful and positive (rather than negative) attributes of it and the influence it has had on my life.

Finally I have shown an evaluation of the particular behavioural characteristics exhibited by six-year olds. Adding in my own idiosyncrasies at that age, it is interesting to see the focus on the nature of chosen creative activities and understanding my own inventions and output at that time. 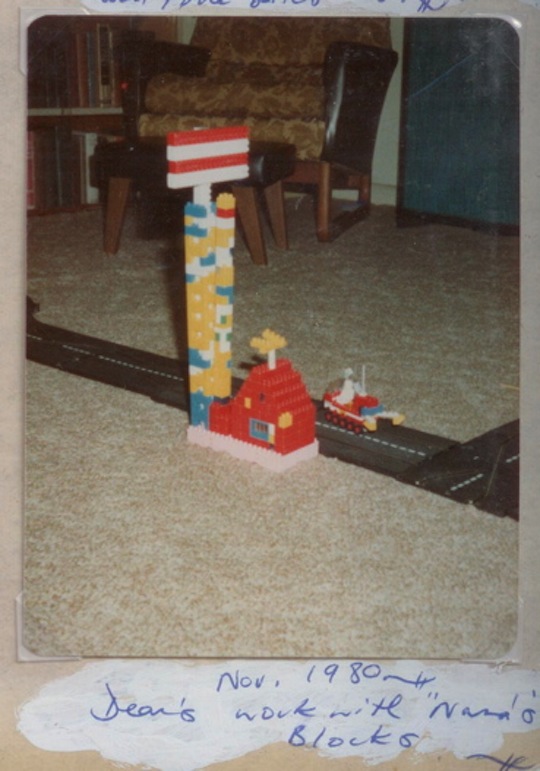 According to the theory of biologist, philosopher and psychologist, Jean Piaget (1896-1980), at six years old you are within a stage of (Pre) Operatory Thought and the two substages of it: the ‘Symbolic Function substage (2-7)’ and what appears critical to me, the ‘Intuitive Thought substage (aged 4-7).’

His central thesis, paraphrased here, was that:

According to the theory of influential psychoanalyst Erik Erikson (1902-1904), at six years old a person is in a life stage where the balance is constantly sought between Industry and Inferiority whereas in middle adulthood the balance that is sought is between Generativity and Stagnation.

It is interesting to note that I now see the awkward moment that followed the sale of my business and came prior to launching into work towards my ‘business with soul’ as a period of necessary stagnancy, relative to Erikson’s theory. It was a period which I intuitively used to readdress my work-life balance, rediscover my ‘inner child’ or authentic self, and counter my period of business, or Generativity, in Erikson’s words. 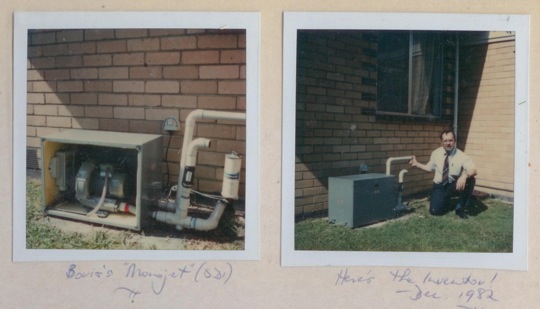 Dean’s Father was an successful inventor during Dean’s Early years. Dean recalls, ‘I remember how happy my Dad was! – Aug 1982 – Image Boris Homicki

I have also came to the realization that my own father appears to have had the most joyful period of his life between the years 1980-1983, interestingly, when I was around 4-7 years of age – or during Piaget’s ‘Intuitive Thought substage.’ Later, following a job loss, he entered a darker period of his life and thus he took a volatile swing from a period of Generativity (he was a bit of an inventor too at the time) – during which time I ‘shadowed’ him industriously with my older sister in his shed, in the backyard, and in the garden – before he completely reinvented as a Reverend. 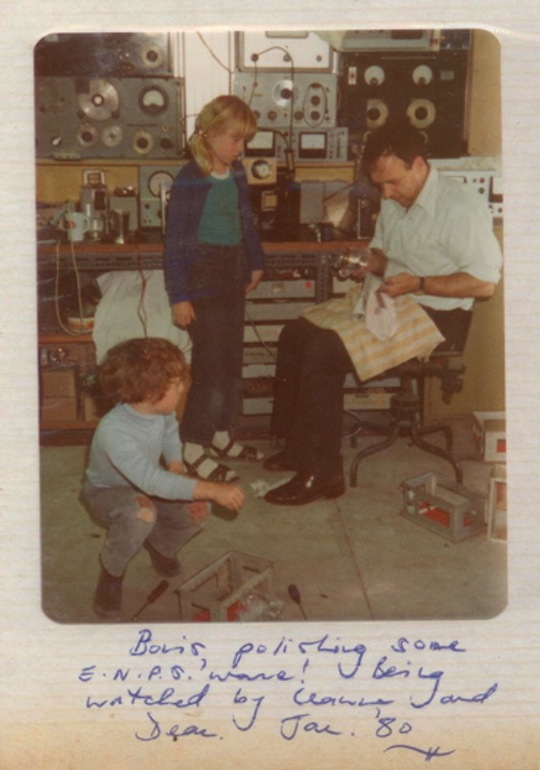 Dean, his Sister and their Dad cleaning a giant electrical valve in his the garage – Jan 1980 – Image Doreen Homicki

One of the few articles that articulates the good, however, was found in reference to an educational setting. Constructed by a writer from U.S. Illinois University, it speaks to a campus childcare facility: “…from birth to adolescence, constructive play is vital to meet most aspects of children’s intellectual, emotional, social, and physical development. Consequently, play prepares children for academic learning – as they begin their school years and at each step along the way. Ultimately, play prepares children for rewarding adult lives.

Many experts believe that adult personality may very well have its foundation in the play of the child…”Six year old behaviourI found it appropriate to hone in on the perceived characteristics of a current day to the average six year old and their ‘activity’ behaviour to see how it relates to my own perceptions of my behaviour at that age, as well as that of my family, based on conversation, memory and photographic aid. 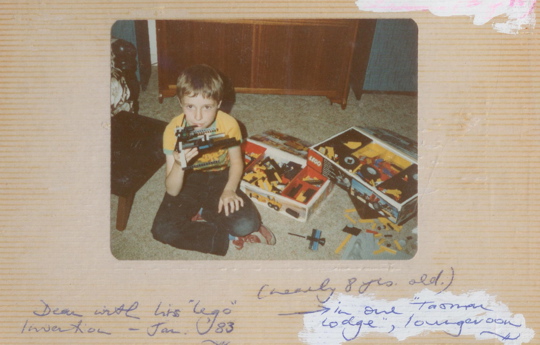 One of many parenting news writers, Monica Malpass summarises their generic behaviour as follows: (I have picked out in bold those aspects that relate to the verbal or physical ‘doing’ of things rather than the emotional aspects) 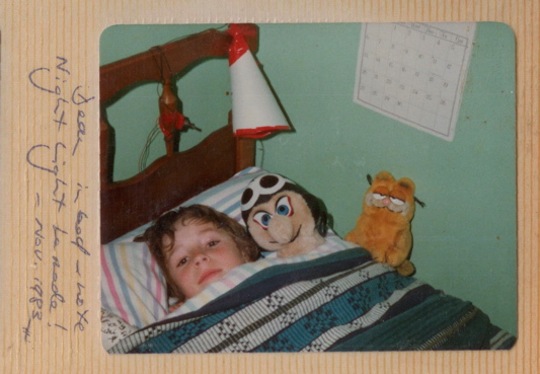 The key difference between her summary of what current 6 year olds are ‘doing’ and my own behaviour at that age is that much of what I was ‘doing’ involved the making (or the finding and modifying) of things that I needed. At that age, like many children around the world, I did not always have what I wanted (and most of what I had needed was available in terms of raw material). 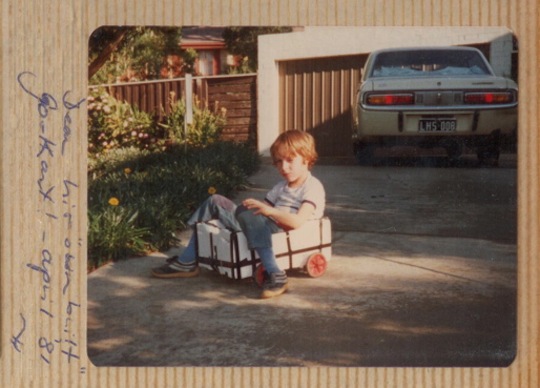 Computers did not find their way into our home at that time, given my generation, but bits of Dad’s electrical and telecommunications kit, garden equipment and tools did. 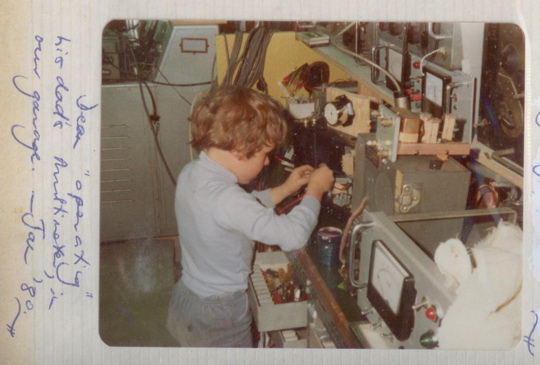 Always under a watchful eye – but a knowledgeable and patient watchful eye – I was allowed to examine and try out all manners of things with a sense of inventive purpose: the land was dug, walls were built, and all things were made anew into some new and fantastic project without being thrown away. Jobs were done. The annual shed was sorted out too. At the age of six, it was my work and my play and I couldn’t get enough of it. 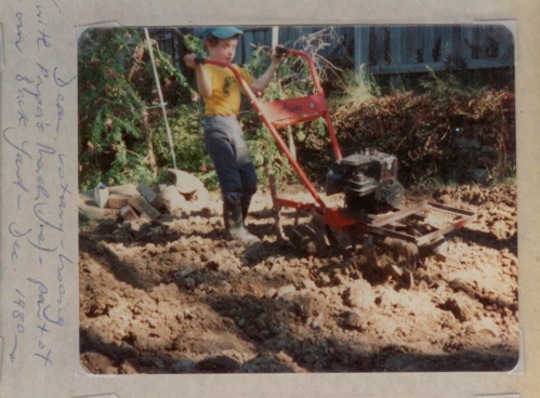 “It’s interesting, I actually remember doing this. It’s an Australian product but I think it has a French motor!” 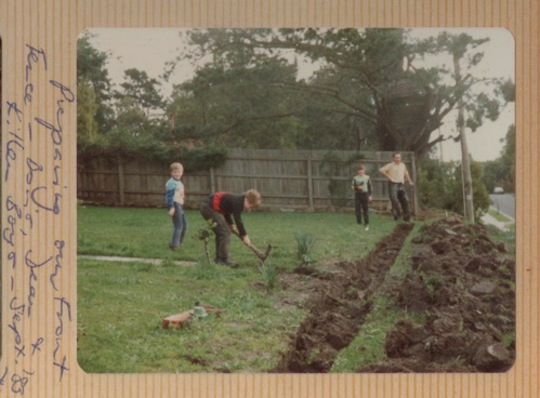 My readily obtainable media was of the natural variety found out-of-doors, found through playing at home, in the garden and in my immediate community. Mud, sticks, stones and water featured strongly. I tinkered, made and reenacted as my friends watched on. 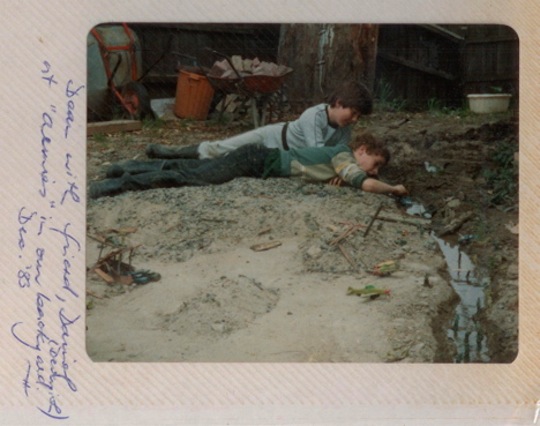 I had few other toys, although was treated to a set of lego with which I built my own Star Wars –esque communities, cities and transport on the bumpy surfaced brown carpet next to the vinyl record player.“It’s really empowering looking at all of this, in terms of what I am doing now and what I was doing then.”I was definitely more of a lego designer preferring joining by clipping on at the time than a nuts and bolts meccano approach. 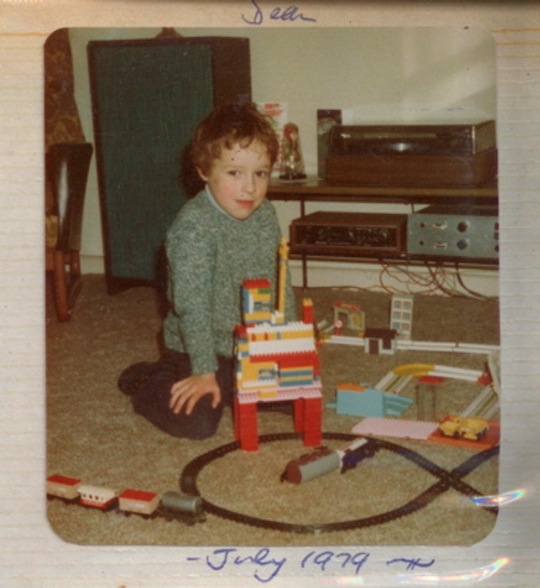 I am not sure about the ‘rights’ or ‘wrongs’ of these differences, it’s not really the point of this article. What I believe is the point is the insight that can be gained from looking at the things are that six year olds do especially in their creative play as a pointer for how we later as adults may find ourselves being drawn to reflecting upon this time in order to evolve and build upon our natural talents that are clearly manifested during that period in order to move forward to become our authentic selves and evolve ‘businesses with soul.’

Creative Play and what it can lead to…The fact that my own childhood play was orientated towards creative play in the natural environment has drawn me to looking at the lifetime work of two key influencers or protagonists of this kind of play: Rudolf Steiner (1861-1925) and Dr Maria Montessori (1870-1957) and the two education approaches that have evolved from their teachings; the Waldorf and Montessori methods.

Without going into detail of the differences of the two methods, this overview by Susan Mayclin Stephenson describing their ‘common ground,’ is in my view a rich model in itself for evolving not only an authentic educational system for children but also a ‘business with soul.’

All of this study has allowed me to see more clearly how I myself fit into the web of life, comprehend better the relationship between childhood and adulthood, resurface positive aspects of my own childhood and cherish in particular those moments around and about the age of six, where I would spend hours ‘inventing’ and fabricating ‘products’ at home, inside and out. 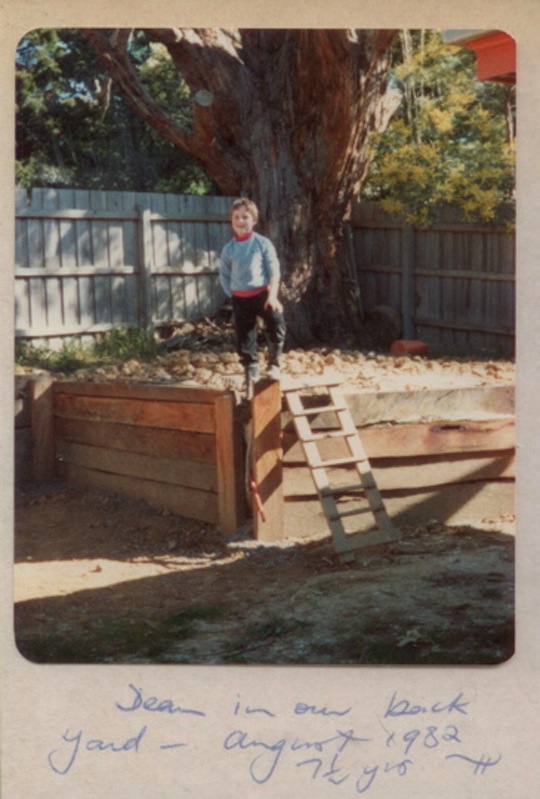 A visionary moment? Standing proud on top of the new retaining Dean and his Father wall made from recycled materials – Aug 1982 – Image Doreen Homicki

It has given me the means to enhance the development of my ‘business with soul’ with the rich spin-off that It naturally endowed me with time and space to appreciate and foster the parallel development of my own son.

Perhaps you will now feel drawn as I have to explore the latent period of your life whan you were six; the positive connections held within it and the nature of your own creative play, as part of your own journey for developing your ‘authentic self’ and ‘business with soul.’

I certainly hope so as I feel as if I am ‘returning,‘coming back to my roots,’ however you would like to put it, in terms of what I do and how I go about things as I continue to create my ‘business with soul.’ 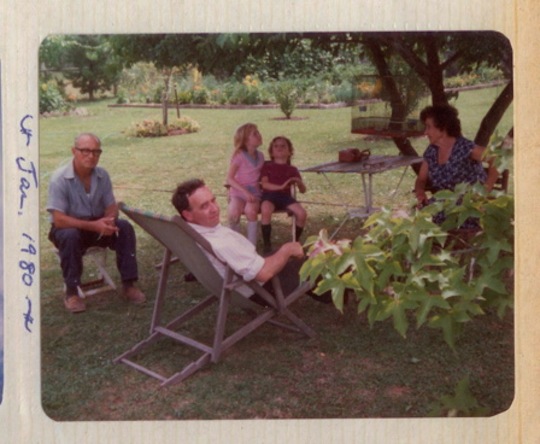 I do also remember Nana Paula & Pupa Alex’s Garden…a place had ‘soul’ too, that was one lovely place where we were when I was six when I wasn’t doing what I was doing.

For I was not a hanger-oner you know. I was a do-er! All of us, especially my Dad. 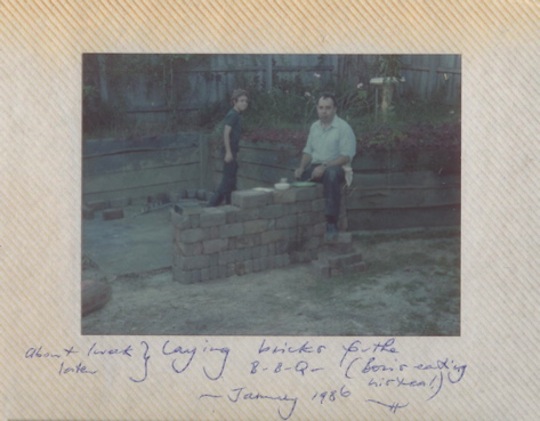